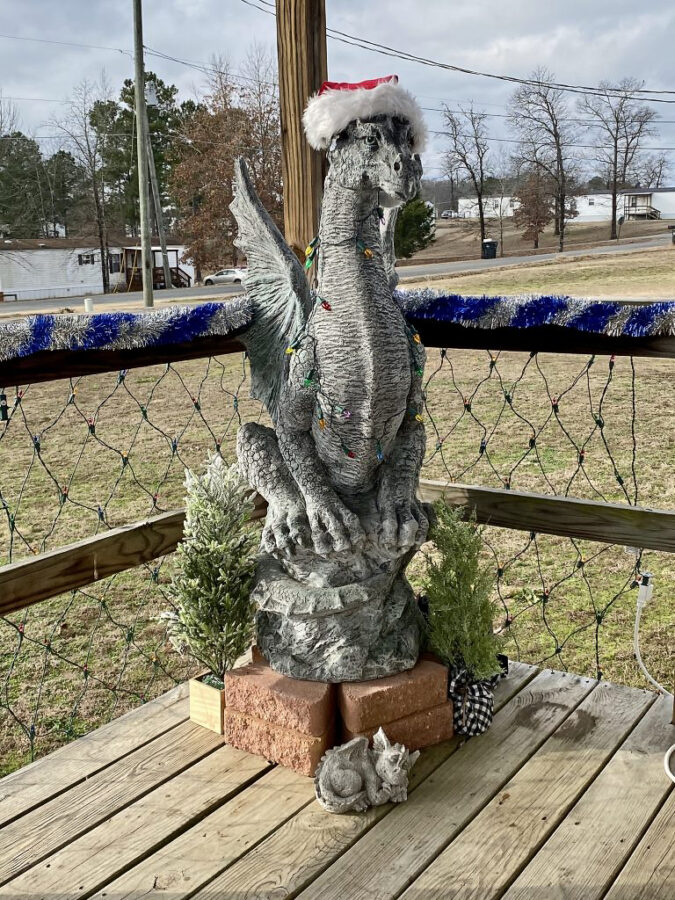 (scroll to the bottom for the art)

I LOVE the vacations back home! The flight in was alright. 4 planes, but it was ok. Not the worst trip, but not the best. About average. Doable.

We pretty much slept off jetlag in LA during an overnight layover, so getting there, we weren’t just completely zombified.

Rented a car, because it is always better to have your own wheels when vacationing. Biggest damned thing I have ever driven. It was a Toyota 4Runner, and it had NO stepsides… so you had to kind of jump to even get your ass on the seat. Good thing it had “oh shit” bars. That way you could just kind of drag yourself into the floorboard haha

Unfortunately, mom had to work while we were there, but she did take some days off for the holidays, so we could do it right. This was the first time in a LONG time that she cooked dinner. And it fucking ROCKED! Makes me wanna take a trip back just to have some more nums! LOL It was just my mom, brother, me and Sven, and my 3 brats. So cute and cozy. I wish a couple of other family members had also joined in, but hey… water under the bridge.

No tree, no gifts, just lots of food and laughing. The way it SHOULD be. However, I forgot to take a photo of the spread… I was too busy eating haha

This was my mom’s Christmas tree, btw.

First weekend was Karaoke! Well, my mom and Herb did all the singing. I wanted to, but no way I can get up there and sing in front of anyone LOL. I know I promised, but I just didn’t have enough to drink that night

But enough to make me constantly run to the toilet!

They told me that the place would be kind of empty, but… of course… it wasn’t. They had 3 birthday parties in the same night, so it was PACKED! I was a bit taken aback lol

Herb’s grandaughter has a kitty. Looks so sweet and innocent! But don’t let that fool you… I gotta get me one of these LOL

I started to make another of those Christmas Tree hats because we were going to the same place for Karaoke’ing again. I wanted to get it finished and wear it out to the bar. I did it! I got it finished in 3 days. However… I left it sitting on the chair at Herb’s house. I was so mad at myself! Oh well, we had fun, anyway! My daughter, Carly, got her first taste of “real” karaoke. She got up there and sung! She used a really REALLY deep voice, but when we all got back out to the truck, she started singing along with the radio in a really awesome tenor voice. Where the hell was she hiding that in the bar? We’ll never know.

The hat still got passed around a few times. Though, THIS is my favorite of the photos caught… I did wear it out a lot afterward, though! No photos with me wearing it, though lol.

For New Year’s Eve, we went to a big hotel for a gig Just Sayin’ was having. They are a really cool cover band that my mom and Herb follows around a lot. I really like them. Hopefully, one day, I will get around to decorating one of their guitars

And my hat made it on stage! My son was wearing it, then someone else grabbed it, then another and another until it ended up here! This seriously made my year haha! **proud moment**

I also had to make a couple more hats for the new year celebration. Thanks to Stephanie Pokorny for the patterns.

I will also be making a couple more for the next visit. Gotta keep some whimsy in life! Too short for boring.

New Year’s Day was for recovery LOL! We needed it! I had NO voice the next morning. It was definitely a party to bring in the new decade.

We had to leave the next day, unfortunately. But I got to see Jan and Raqual in the day’s layover. The visits to Cali are just too short. We will have to make a trip specially for there sometime in the future.

Thank you guys for the awesome chat and the cool gifts! You two are some seriously lovely people.

It was an awesome vacation, just like it always is when we go there! My mom makes ALL VACATIONS worth it. I am so lucky to have a party animal parent haha

And, I can’t forget my shopping trip. This may seem like a lot, but it is actually an entire year worth of shit in a couple of weeks. There is no place for shopping here.

We had to send a couple of boxes by post, so I will make another post about those when they arrive.

Of course, Zelda crap. I can’t take a trip without getting a few things. I saw the two “vintage” games, so I could NOT leave them behind! The decals went on my ipad cover. That way, Sven and I can tell ours apart easier.

Of course, I don’t have enough hobbies, so I picked up shuttle tatting and needle felting. Hopefully I can do something neat with these. And my mom introduced me to the plague that most people call diamond painting. Yep. I had to get a few of those to take home haha!

And yarn. So much yarn. And there is a bit more coming in the boxes haha!

I have to say, this was one of the best New Year’s I could have ever asked for.

Random photos from the trip.

Flight home was a nightmare. 3 planes. That, alone, already put me in kind of a crappy mood.

There was a old lady behind me that didn’t get the concept of LIGHTLY touching the movie screen at the back of my head… so **tap tap tap** for the whole flight. Not the best thing for such enclosed space… I wanted to turn around and smack her hand away from the back of my seat. It’s ok though. I’m getting off the plane soon.

Kid, about 8 years old, constantly kicking my chair and pushing against my lower back… couldn’t stop screwing around with the tray table… and just wouldn’t shut up, in general. Now I’m getting annoyed, but it’s ok. I can be patient. No problem.

3 hours of a devil-child and his demon-spawn siblings. The mother had her face stuck to the window (when she wasn’t sleeping) and just let her kids reek havoc on the plane. Wouldn’t stay seated… screamed at the flight attendants… hit at people who said “shhh”… ran up and down the aisle…

The mother, at one point, changed his shitty diaper right there beside my husband and left it for the attendants to clean up.

The lady attendant told her several times to sit her kid down and buckle him in, but the woman pretended she didn’t know what the lady was saying.

The pilot even came on the PA and openly told people to control their kids.

I am surprised we didn’t get detained as we left, because there has NEVER been a moment in my entire life that I wanted to physically harm a child… until now. This was pushing it! Along with the rest of the hell-spawn. I seriously wanted to chuck them all out the window with the risk of the plane going down! Ugh!

And the wrap up in art: It has been a good year. I took off December for drawing, but I did make a few other things. Actually… SO many other things… 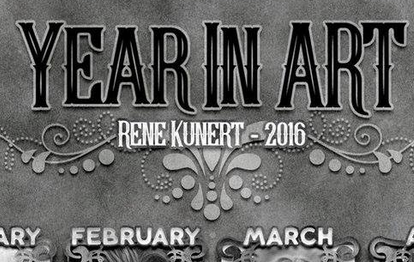 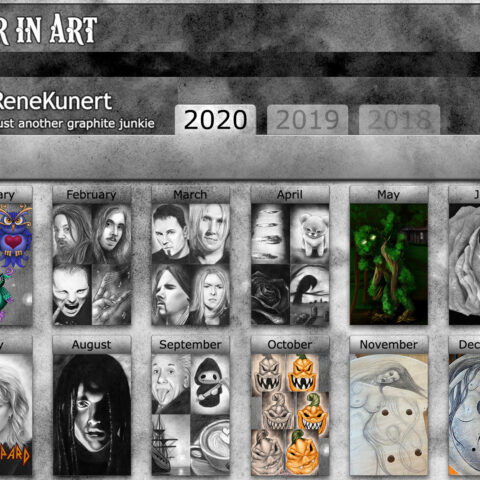 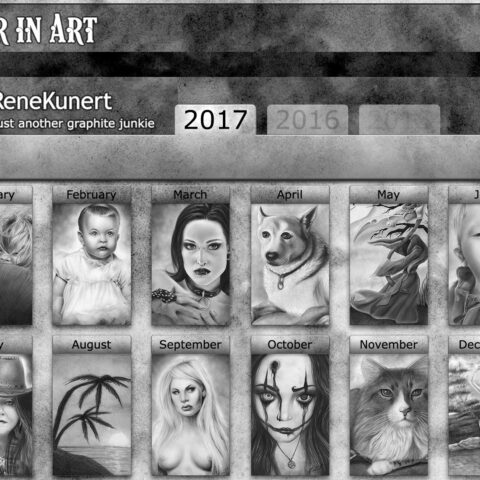 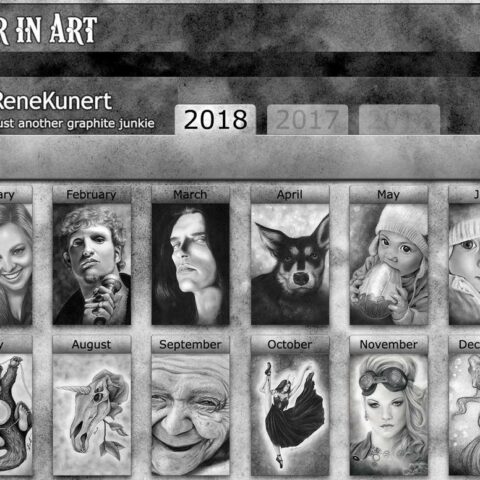 This site uses Akismet to reduce spam. Learn how your comment data is processed.

Life is creation – self and circumstances, the raw material. ⥭ Dorothy Richardson